On this page
Kong Gateway
2.8.x

Traditionally, Kong has always required a database, to store configured entities such as Routes, Services, and Plugins.

In this mode, Kong nodes in a cluster are split into two roles: control plane (CP), where configuration is managed and the Admin API is served from; and data plane (DP), which serves traffic for the proxy. Each DP node is connected to one of the CP nodes. Instead of accessing the database contents directly in the traditional deployment method, the DP nodes maintain connection with CP nodes, and receive the latest configuration. 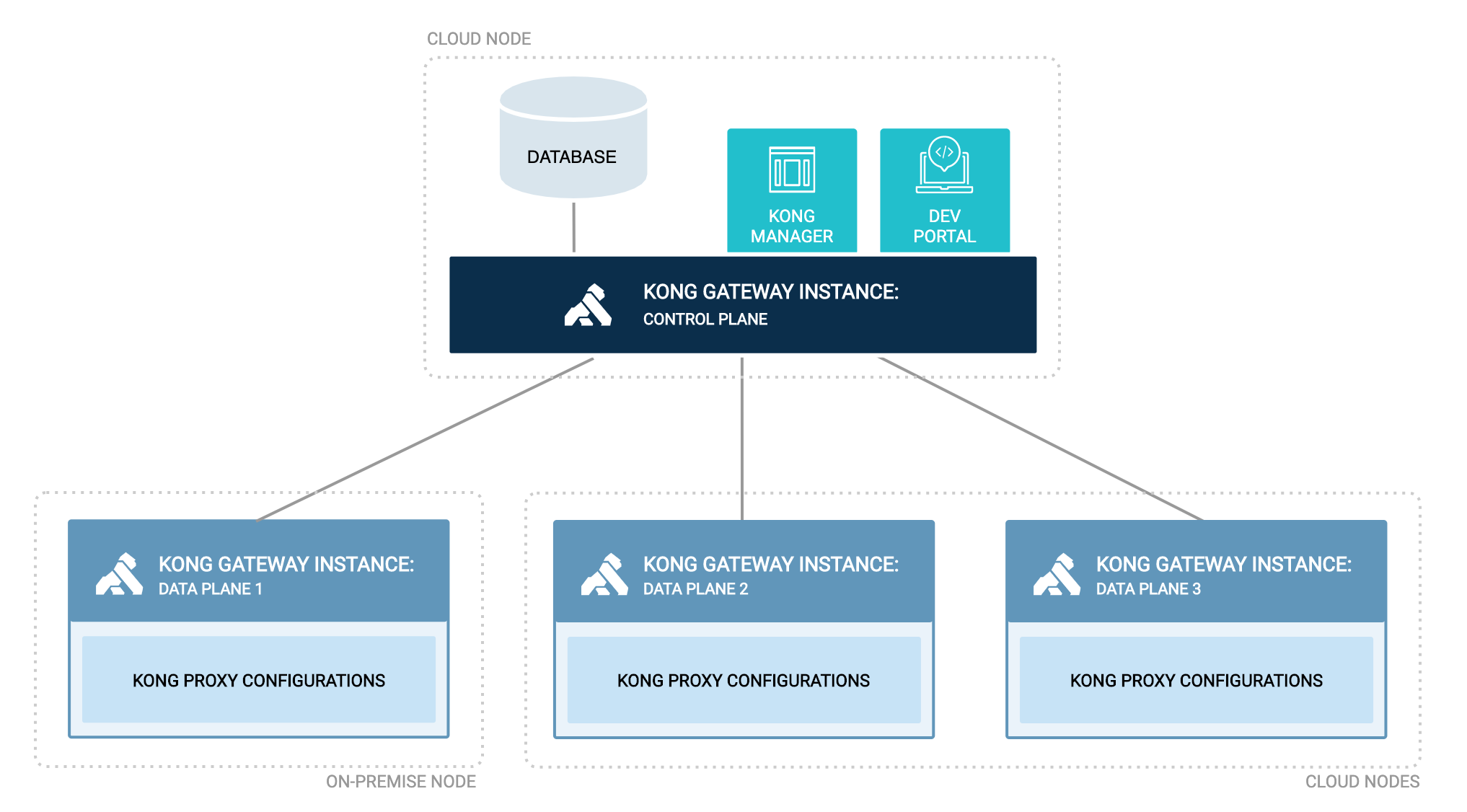 Once connected, every Admin API or Kong Manager action on the control plane triggers an update to the data planes in the cluster.

Kong Gateway on Kubernetes fully supports hybrid mode deployments, with or without the Kong Ingress Controller.

A new data plane node can be provisioned during control plane downtime. This requires either copying the config cache file (config.json.gz) from another data plane node, or using a declarative configuration. In either case, if it has the role of "data_plane", it will also keep trying to contact the control plane until it’s up again.

To change a disconnected data plane node’s configuration, you have to remove the config cache file (config.json.gz), ensure the declarative_config parameter or the KONG_DECLARATIVE_CONFIG environment variable is set, and set the whole configuration in the referenced YAML file.

By default, data planes store their configuration to the file system in an unencrypted cache file, config.json.gz, in Kong Gateway’s prefix path. You can also choose to encrypt this cache, or disable it entirely.

If encrypted, the data plane uses the cluster certificate key to decrypt the configuration cache on startup.

When a configuration change is made at the control plane level via the Admin API, it immediately triggers a cluster-wide update of all data plane configurations. This means that the same configuration is synced from the CP to all DPs, and the update cannot be scheduled or batched. For different DPs to have different configurations, they will need their own CP instances.

When plugins are running on a data plane in hybrid mode, there is no Admin API exposed directly from that DP. Since the Admin API is only exposed from the control plane, all plugin configuration has to occur from the CP. Due to this setup, and the configuration sync format between the CP and the DP, some plugins have limitations in hybrid mode:

Custom plugins (either your own plugins or third-party plugins that are not shipped with Kong) need to be installed on both the control plane and the data plane in hybrid mode.

Currently, there is no automated load balancing for connections between the control plane and the data plane. You can load balance manually by using multiple control planes and redirecting the traffic using a TCP proxy.

Because the keyring module encrypts data in the database, it can’t encrypt data on data plane nodes, since these nodes run without a database and get data from the control plane.