On this page
Kong Gateway (OSS)
2.4.x (latest)
Maybe you were looking for the Kong Gateway (Enterprise) documentation instead?

In this mode Kong nodes in a cluster are separated into two roles: control plane (CP), where configuration is managed and the Admin API is served from, and data plane (DP), which serves traffic for the proxy. Each DP node is connected to one of the CP nodes. Instead of accessing the database contents directly in the traditional deployment method, the DP nodes maintains connection with CP nodes, and receives the latest configuration. 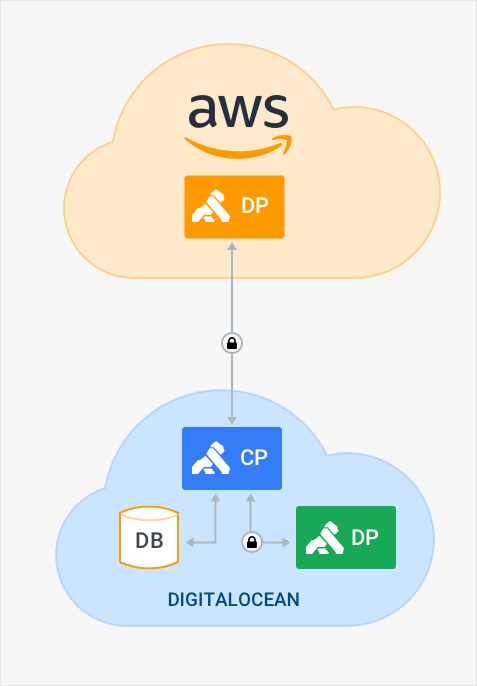 Starting the control plane is fairly simple. Aside from the database configuration which is the same as today, we need to specify the “role” of the node to “control_plane”. This will cause Kong to listen on 0.0.0.0:8005 by default for data plane connections. The 8005 port on the control plane will need to be accessible by all the data plane it controls through any firewalls you may have in place.

Note that control plane still needs a database (Postgres or Cassandra) to store the “source of truth” configurations, although the database never needs to be access by data plane nodes. You may run more than a single control plane nodes to provide load balancing and redundancy as long as they points to the same backend database.

In PKI mode, the control plane and data plane don’t need to use the same cluster_cert and cluster_cert_key. Instead, Kong validates both sides by checking if they are from the same CA. This eliminates the risk of transporting private keys around.

Set the following configuration parameters in kong.conf on the control plane:

Set the following configuration parameters in kong.conf on the data plane:

cluster_server_name specifies the SNI (Server Name Indication extension) to use for data plane connections to the control plane through TLS. When not set, data plane will use kong_clustering as the SNI.

When Kong is running Hybrid mode with PKI mode, the Control Plane can be configured to optionally check for revocation status of the connecting Data Plane certificate.

The supported method is through Online Certificate Status Protocol (OCSP) responders. Issued data plane certificates must contain the Certificate Authority Information Access extension that references the URI of OCSP responder that can be reached from the Control Plane.

To enable OCSP checks, set the cluster_ocsp config on the Control Plane to one of the following values:

Now that a control plane is running, it is not very useful if no data plane nodes are talking to it and serving traffic (remember control plane nodes can not be used for proxying). To start the data plane, all we need to do is to specify the “role” to “data_plane”, give it the address and port of where the control plane can be reached and the node automatically connects and syncs itself up with the current configuration.

Note: In this release of the Hybrid Mode, the data plane receives updates from the Control Plane via a format that is similar to the Declarative Config, therefore the database property has to be set to off for Kong to start up properly.

When set as a DP node, Kong will follow the following steps regarding its configuration:

You may want to check the status of the Kong cluster from time to time, such as checking to see the which nodes are actively receiving config updates from control plane, or when was it last updated. This can be achieved by using the control plane’s new Cluster Status API:

The Cluster Status API provides helpful information such as the name of the node and last time it synced with the control plane, as well as config version currently running on them.

Once the nodes are setup, use the Admin API on the control plane as usual, those changes will be synced and updated on the data plane nodes automatically within seconds.

In addition, the /clustering/data-planes Admin API endpoint will return the version of the data plane node and the latest config hash the node is using. These will help detect version incompatibilities from the control plane side.