This document covers integrating Kong Vitals with a new or existing Prometheus time-series server or cluster. Leveraging a time-series database for Vitals data can improve request and Vitals performance in very-high traffic Kong Enterprise clusters (such as environments handling tens or hundreds of thousands of requests per second), without placing addition write load on the database backing the Kong cluster.

For using Vitals with a database as the backend (i.e. PostgreSQL, Cassandra), please refer to Kong Vitals.

Kong Vitals integrates with Prometheus using an intermediary data exporter, the Prometheus StatsD exporter. This integration allows Kong to efficiently ship Vitals metrics to an outside process where data points can be aggregated and made available for consumption by Prometheus, without impeding performance within the Kong proxy itself. In this design, Kong writes Vitals metrics to the StatsD exporter as StatsD metrics. Prometheus scrapes this exporter as it would any other endpoint. Kong then queries Prometheus to retrieve and display Vitals data via the API and Kong Manager. Prometheus does not ever directly scrape the Kong nodes for time series data. A trivialized workflow looks as follows: 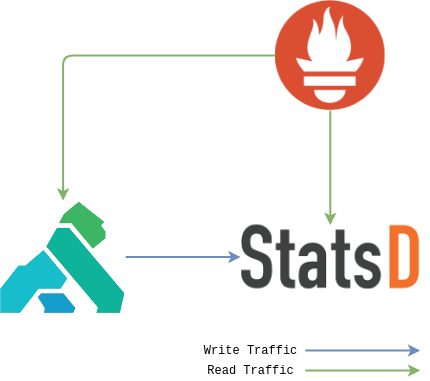 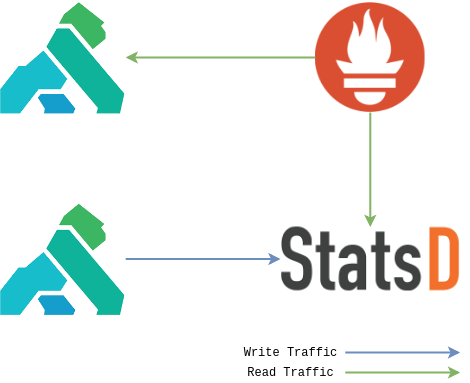 In either case, the StatsD exporter process can be run either as a standalone process/container or as a sidecar/adjacent process within a VM. Note that in high-traffic environments, data aggregation within the StatsD exporter process can cause significant CPU usage. In such cases, we recommend to run Kong and StatsD processes on separate hardware/VM/container environments to avoid saturating CPU usage.

The latest release of Prometheus can be found at the Prometheus download page.

Prometheus should be running on a separate node from the one running Kong. For users that are already using Prometheus in their infrastructure, it’s possible to use existing Prometheus nodes as Vitals storage backend.

In this guide, we assume Prometheus is running on hostname prometheus-node using default config that listens on port 9090.

StatsD exporter is distributed as a Docker image. Pull the latest version with the following command:

The StatsD mapping rules file must be configured to match the metrics sent from Kong. To learn how to customize the StatsD events name, please refer to Enable Vitals with Prometheus strategy in Kong section.

StatsD exporter can run either on a separate node from Kong (to avoid resource competition with Kong), or on the same host with Kong (to reduce unnecessary network overhead).

In this guide, we assume StatsD exporter is running on hostname statsd-node, using default config that listens to UDP traffic on port 9125 and the metrics in Prometheus Exposition Format are exposed on port 9102.

To configure Prometheus to scrape StatsD exporter, add the following section to scrape_configs in prometheus.yaml.

If you are using service discovery, it will be more convenient to configure multiple StatsD exporters in Prometheus. Please refer to the scape_configs section of Prometheus document for further reading.

By default, the Vitals graph in Kong Manager uses the configured target address in the legend, which is named instance in the Prometheus metrics label. For some service discovery setups where instance is IP:PORT, the user might want to relabel the instance label to display a more meaningful hostname in the legend. To do so, the user can also refer to the scape_configs section and rewrite the instance label with the corresponding meta label.

For example, in a Kubernetes environment, use the following relabel rules:

You can change this in your configuration to enable Vitals with Prometheus:

Please update statsd-node and prometheus-node with the actual hostname that runs StatsD exporter and Prometheus.

As with other Kong configurations, your changes take effect on kong reload or kong restart.

If you set scrape_interval in Prometheus other than the default value of 5 seconds, you will also need to update the following:

The above option configures interval parameter when querying Prometheus. The value new_value_in_seconds should be equal or larger than scrape_interval config in Prometheus.

You can also configure Kong to send StatsD events with a different prefix from the default value of kong. Make sure the prefix in statsd.rules is same as that in Kong configuration:

If you use Grafana, you can import the Kong Vitals Prometheus dashboard to visualize the data.

In your Grafana installation, click the + button in the sidebar, and choose Import.

On the Import screen, find the Grafana.com Dashboard field and enter 11870. Then, click Load. Optionally, you can also download the JSON model from https://grafana.com/grafana/dashboards/11870 and import it manually.

On the next screen, select the Prometheus datasource that is configured to scrape statsd-exporter, then click Import.

As the amount of concurrent requests increases, the length of the queue to store unprocessed UDP events will grow as well. It’s necessary to increase the UDP read buffer size to avoid possible packet dropping.

To increase the UDP read buffer for the StatsD exporter process, run the binary using the following example to set read buffer to around 3 MB:

To increase the UDP read buffer for the host that’s running, adding the following example line to /etc/sysctl.conf:

And then apply the setting with root privilege:

It is possible to further reduce network overhead by deploying StatsD exporter on the same node with Kong and let the exporter listen on local Unix domain socket.

With the above configuration, the Prometheus StatsD exporter will make available all metrics as provided by the standard Vitals configuration.

Additionally, the exporter process provides access to the default metrics exposed by the Golang Prometheus client library. These metric names include the go_ and process_ prefixes. These data points are related specifically to the StatsD exporter process itself, not Kong. Infrastructure teams may find this data useful, but they are of limited value with respect to monitoring Kong behavior.