Kong Gateway (Enterprise)
On this page
You are browsing documentation for an outdated version. See the latest documentation here.
Estimated reading time: 7 minutes

Kong Enterprise uses common terms for entities and processes that have a specific meaning in context. This topic provides a conceptual overview of terms, and how they apply to Kong’s use cases.

An Admin is a Kong Enterprise user account capable of accessing the Admin API or Kong Manager. With RBAC and Workspaces, access can be modified and limited to specific entities.

Authentication is the process by which a system validates the identity of a user account. It is a separate concept from authorization.

API gateway authentication is an important way to control the data that is allowed to be transmitted to and from your APIs. An API may have a restricted list of identities that are authorized to access it. Authentication is the process of proving an identity.

Authorization is the system of defining access to certain resources. In Kong Enterprise, Role-Based Access Control (RBAC) is the main authorization mode. To define authorization to an API, it is possible to use the ACL Plugin in conjunction with an authentication plugin.

A Kong Client refers to the downstream client making requests to Kong’s proxy port. It could be another service in a distributed application, a user’s identity, a user’s browser, or a specific device.

A Consumer object represents a client of a Service.

A Consumer is also the Admin API entity representing a developer or machine using the API. When using Kong, a Consumer only communicates with Kong which proxies every call to the said upstream API.

A Host represents the domain hosts (using DNS) intended to receive upstream traffic. In Kong, it is a list of domain names that match a Route object.

Methods represent the HTTP methods available for requests. It accepts multiple values, for example, GET, POST, and DELETE. Its default value is empty (the HTTP method is not used for routing).

A Permission is a policy representing the ability to create, read, update, or destroy an Admin API entity defined by endpoints.

Plugins provide advanced functionality and extend the use of Kong Enterprise, allowing you to add new features to your gateway. Plugins can be configured to run in a variety of contexts, ranging from a specific route to all upstreams. Plugins can perform operations in your environment, such as authentication, rate-limiting, or transformations on a proxied request.

Kong is a reverse proxy that manages traffic between clients and hosts. As a gateway, Kong’s proxy functionality evaluates any incoming HTTP request against the Routes you have configured to find a matching one. If a given request matches the rules of a specific Route, Kong processes proxying the request. Because each Route is linked to a Service, Kong runs the plugins you have configured on your Route and its associated Service and then proxies the request upstream.

One of the key benefits of using a reverse proxy is the ability to cache frequently-accessed content. The benefit is that upstream services do not need to waste computation on repeated requests.

One of the ways Kong delivers performance is through Proxy Caching, using the Proxy Cache Advanced Plugin. This plugin supports performance efficiency by providing the ability to cache responses based on requests, response codes and content type.

Kong receives a response from a service and stores it in the cache within a specific timeframe.

For future requests within the timeframe, Kong responds from the cache instead of the service.

The cache timeout is configurable. Once the time expires, Kong forwards the request to the upstream again, caches the result, and then responds from the cache until the next timeout.

The plugin can store cached data in-memory. The tradeoff is that it competes for memory with other processes, so for improved performance, use Redis for caching.

Rate Limiting allows you to restrict how many requests your upstream services receive from your API consumers, or how often each user can call the API. Rate limiting protects the APIs from inadvertent or malicious overuse. Without rate limiting, each user may request as often as they like, which can lead to spikes of requests that starve other consumers. After rate limiting is enabled, API calls are limited to a fixed number of requests per second. 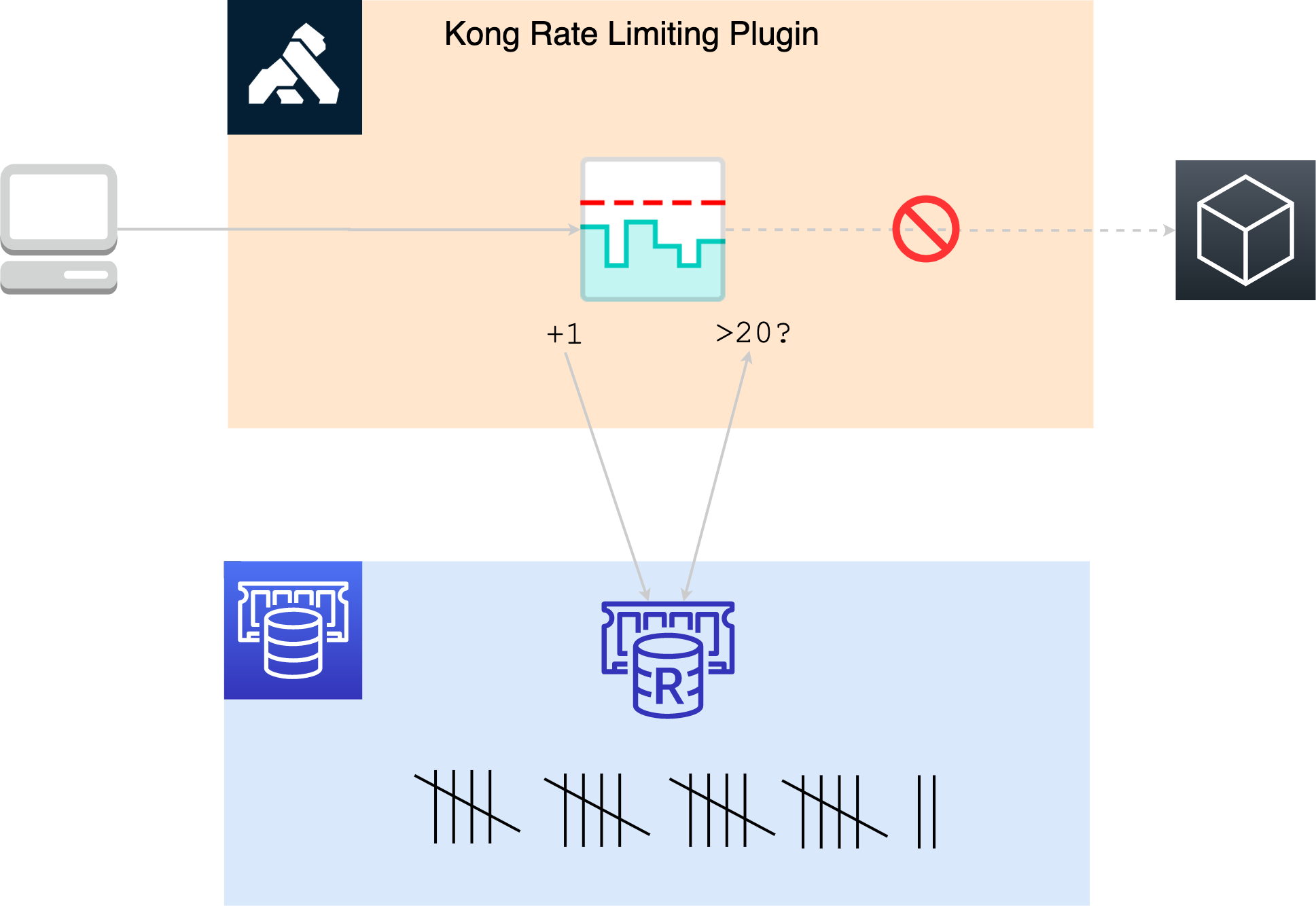 In this workflow, we are going to enable the Rate Limiting Advanced Plugin. This plugin provides support for the sliding window algorithm to prevent the API from being overloaded near the window boundaries and adds Redis support for greater performance.

A Role is a set of permissions that may be reused and assigned to Admins. For example, this diagram shows multiple admins assigned to a single shared role that defines permissions for a set of objects in a workspace. 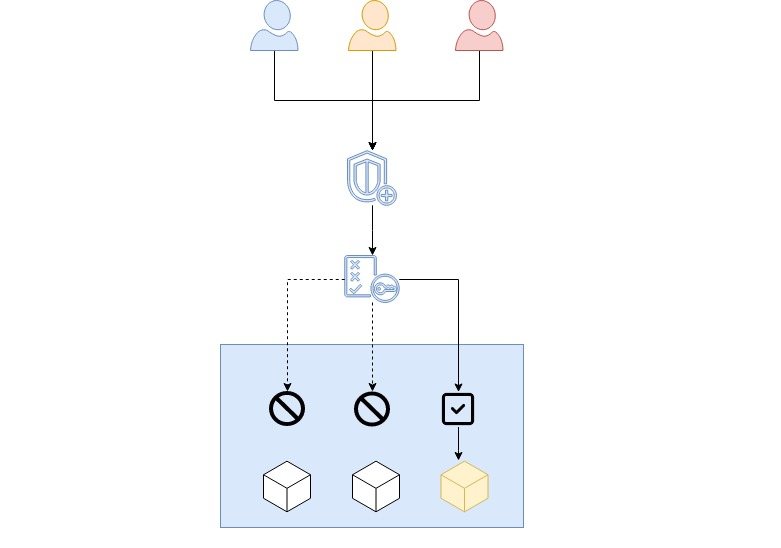 A Route, also referred to as Route object, defines rules to match client requests to upstream services. Each Route is associated with a Service, and a Service may have multiple Routes associated with it. Routes are entry-points in Kong and define rules to match client requests. Once a Route is matched, Kong proxies the request to its associated Service. See the Proxy Reference for a detailed explanation of how Kong proxies traffic.

Before you can start making requests against a Service, you need to add a Route to it. Routes specify how (and if) requests are sent to their Services after they reach Kong. A single Service can have many Routes. After configuring the Service and the Route, you’ll be able to make requests through Kong using them.

A Super Admin, or any Role with read and write access to the /admins and /rbac endpoints, creates new Roles and customize Permissions. A Super Admin can: 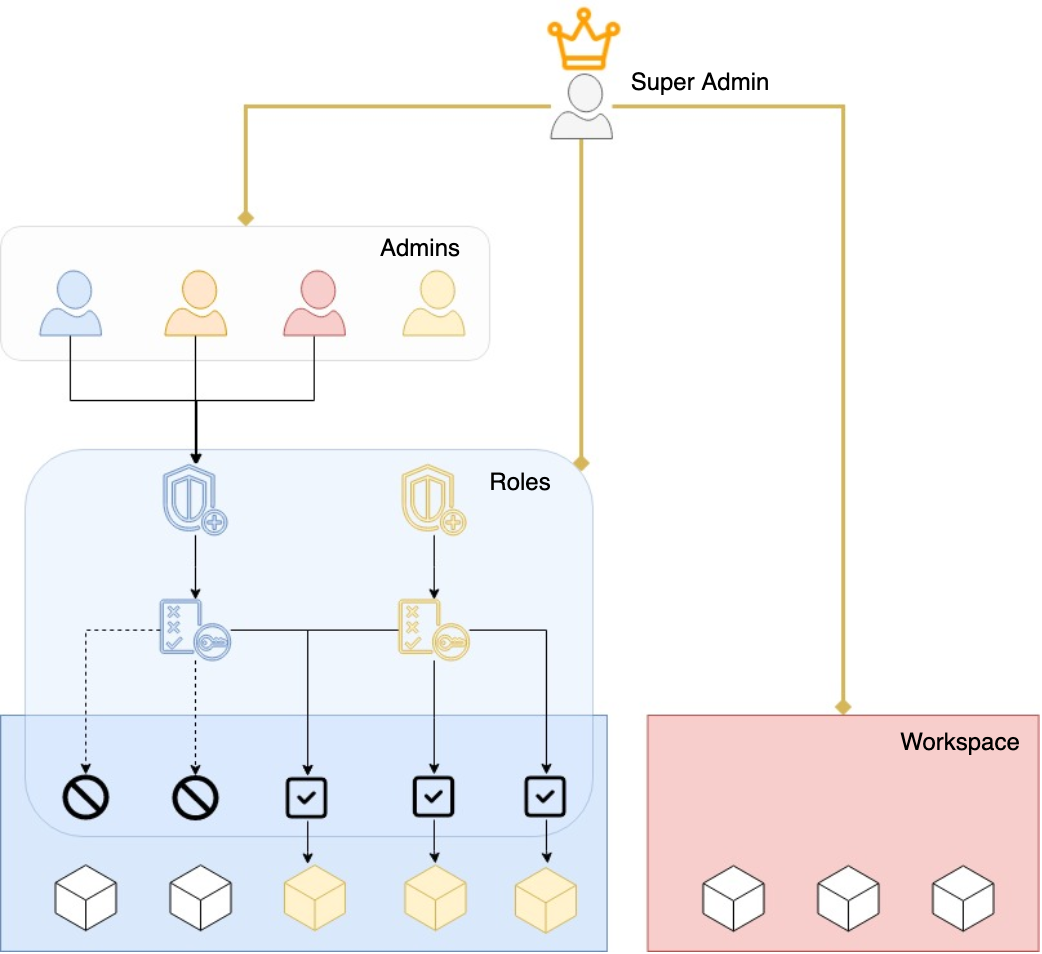 Tags are customer defined labels that let you manage, search for, and filter core entities using the ?tags querystring parameter. Each tag must be composed of one or more alphanumeric characters, \_\, -, . or ~. Most core entities can be tagged via their tags attribute, upon creation or edition.

An Upstream object refers to your upstream API/service sitting behind Kong, to which client requests are forwarded. An Upstream object represents a virtual hostname and can be used to load balance incoming requests over multiple services (targets). For example, an Upstream named service.v1.xyz for a Service object whose host is service.v1.xyz. Requests for this Service object would be proxied to the targets defined within the upstream.