When building any modern digital application, we will inevitably introduce services that will communicate with each other by making requests on the network. 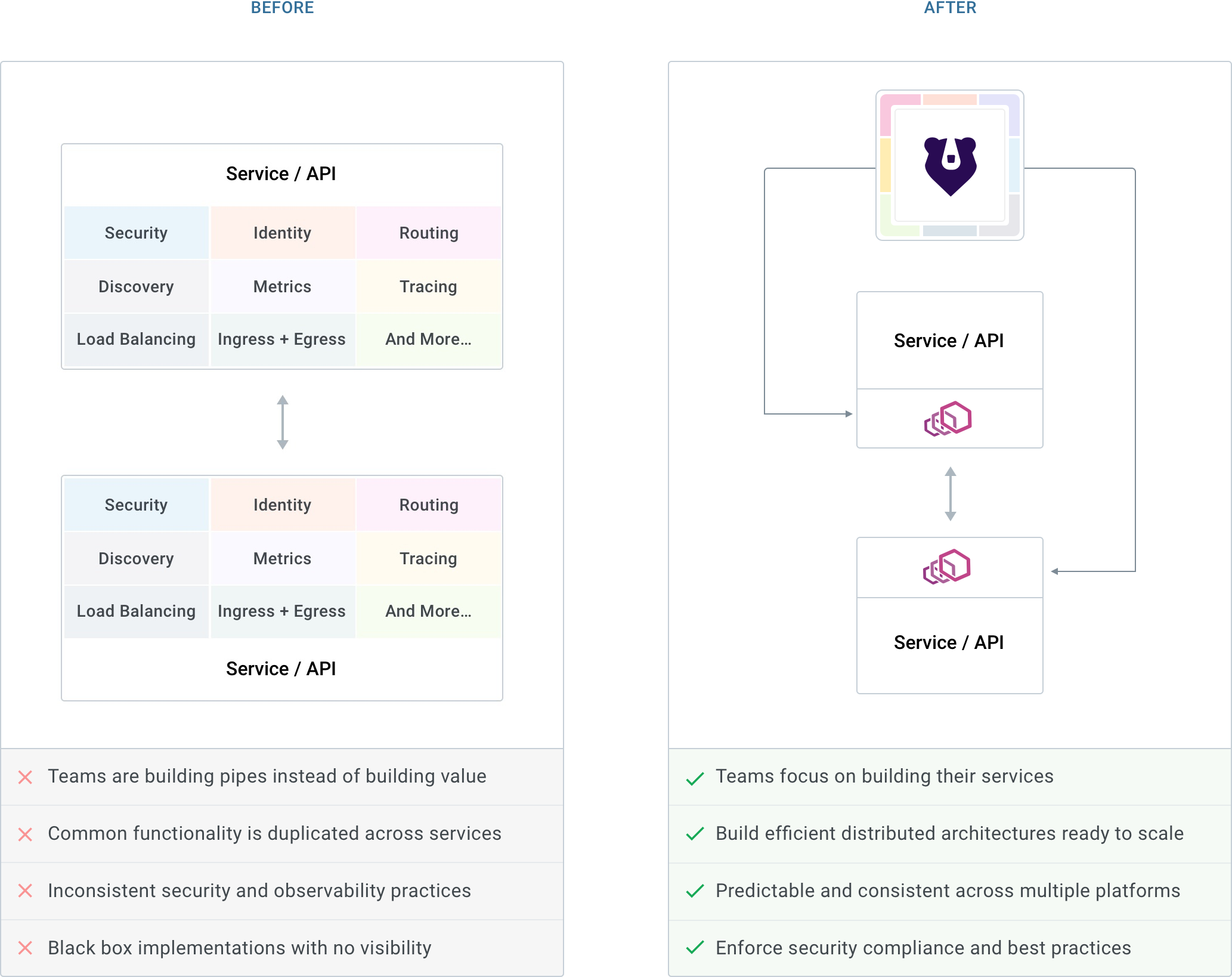 For example, think of any application that communicates with a database to store or retrieve data, or think of a more complex microservice-oriented application that makes many requests across different services to execute its operations:

Every time our services communicate over the network, we put the end-user experience at risk. As we all know the network between different services can be slow and unpredictable. It can be insecure, hard to trace, and pose many other problems (e.g., routing, versioning, canary deployments). In one sentence, our applications are one step away from being unreliable.

Usually, at this point, developers take one of the following actions to remedy the situation:

Sidecar Proxy: It’s called sidecar proxy because the proxy it’s another process running alongside our service process on the same underlying host. There is going to be one instance of a sidecar proxy for each running instance of our services, and because all the incoming and outgoing requests - and their data - always go through the sidecar proxy, it is also called a data-plane (DP) since it sits on the data path.

Since we are going to be having many instances for our services, we are also going to be having an equal number of sidecar proxies: that’s a lot of proxies! Therefore the sidecar proxy model requires a control plane that allows a team to configure the behavior of the proxies dynamically without having to manually configure them. The proxies initiate connections with the control plane to receive new configurations, while at runtime the control provides them with the most updated configuration.

Teams that adopt the sidecar proxy model will either build a control plane from scratch or use existing general-purpose control planes available on the market, such as Kong Mesh. Compare Kong Mesh with other CPs.

Unlike a data plane proxy (DP), the control plane (CP) is never on the execution path of the requests that the services exchange with each other, and it’s being used as a source of truth to dynamically configure the underlying data plane proxies that in the meanwhile we have deployed alongside every instance of every service that is part of the Mesh:

Service Mesh: An architecture made of sidecar proxies deployed next to our services (the data-planes, or DPs), and a control plane (CP) controlling those DPs, is called Service Mesh. Usually, Service Mesh appears in the context of Kubernetes, but anybody can build Service Meshes on any platform (including VMs and Bare Metal).

With Kong Mesh, our main goal is to reduce the code that has to be written and maintained to build reliable architectures. Therefore, Kong Mesh embraces the sidecar proxy model by leveraging Envoy as its sidecar data-plane technology.

By outsourcing all the connectivity, security, and routing concerns to a sidecar proxy, we benefit from our enhanced ability to:

By reducing the code that our teams create and maintain, we can modernize our applications piece by piece without ever needing to bite more than we can chew. 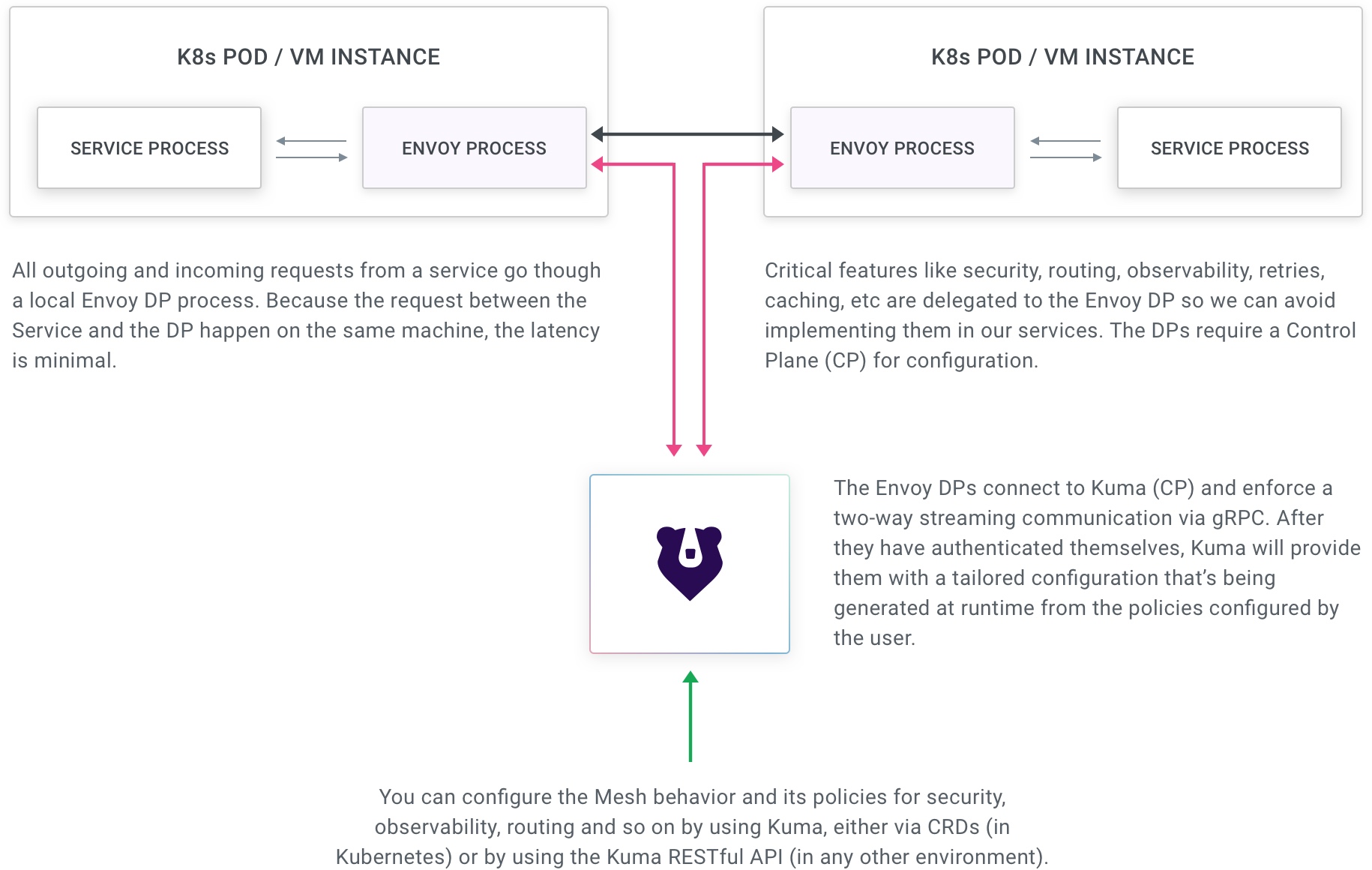 Kong Mesh (kuma-cp) is one single executable written in GoLang that can be installed anywhere, hence why it’s both universal and simple to deploy.

Out of the box, Kong Mesh ships with a bundled Envoy data plane proxy ready to use for our services, so that you don’t have to worry about putting all the pieces together.

Kong Mesh ships with an executable kuma-dp that executes the bundled envoy executable to create the data plane proxy. For details, see the Overview.

Install Kong Mesh and follow the instructions to get up and running in a few steps.

Until now, Service Mesh has been considered to be the last step of architecture modernization after transitioning to containers and perhaps to Kubernetes. This approach is entirely backwards. It makes the adoption and the business value of Service Mesh available only after implementing other massive transformations that - in the meanwhile - can go wrong.

In reality, we want Service Mesh to be available before we implement other transitions so that we can keep the network both secure and observable in the process. With Kong Mesh, Service Mesh is indeed the first step towards modernization. 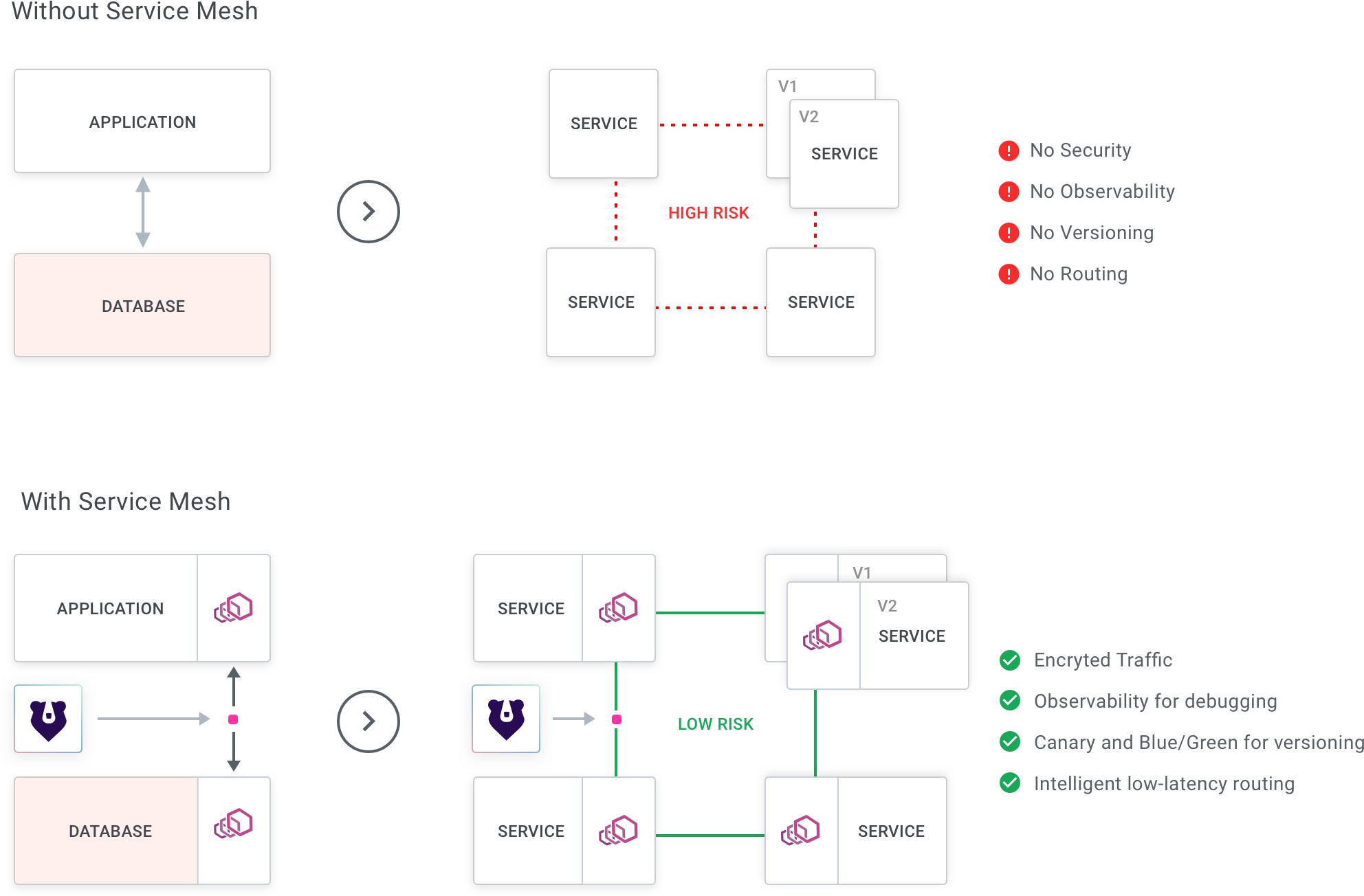 Unlike other control planes, Kong Mesh is easy to use. Anybody - from any team - can implement Kong Mesh in three simple steps across both traditional monolithic applications and modern microservices.

Finally, by leveraging out-of-the-box policies and Kong Mesh’s powerful tagging selectors, we can implement a variety of behaviors in a variety of topologies, similar to multi-cloud and multi-region architectures.

When Service Mesh first became mainstream around 2017, a few control planes were released by small and large organizations in order to support the first implementations of this new architectural pattern.

These control planes captured a lot of enthusiasm in the early days, but they all lacked pragmatism into creating a viable journey to Service Mesh adoption within existing organizations. These 1st generation solutions are: 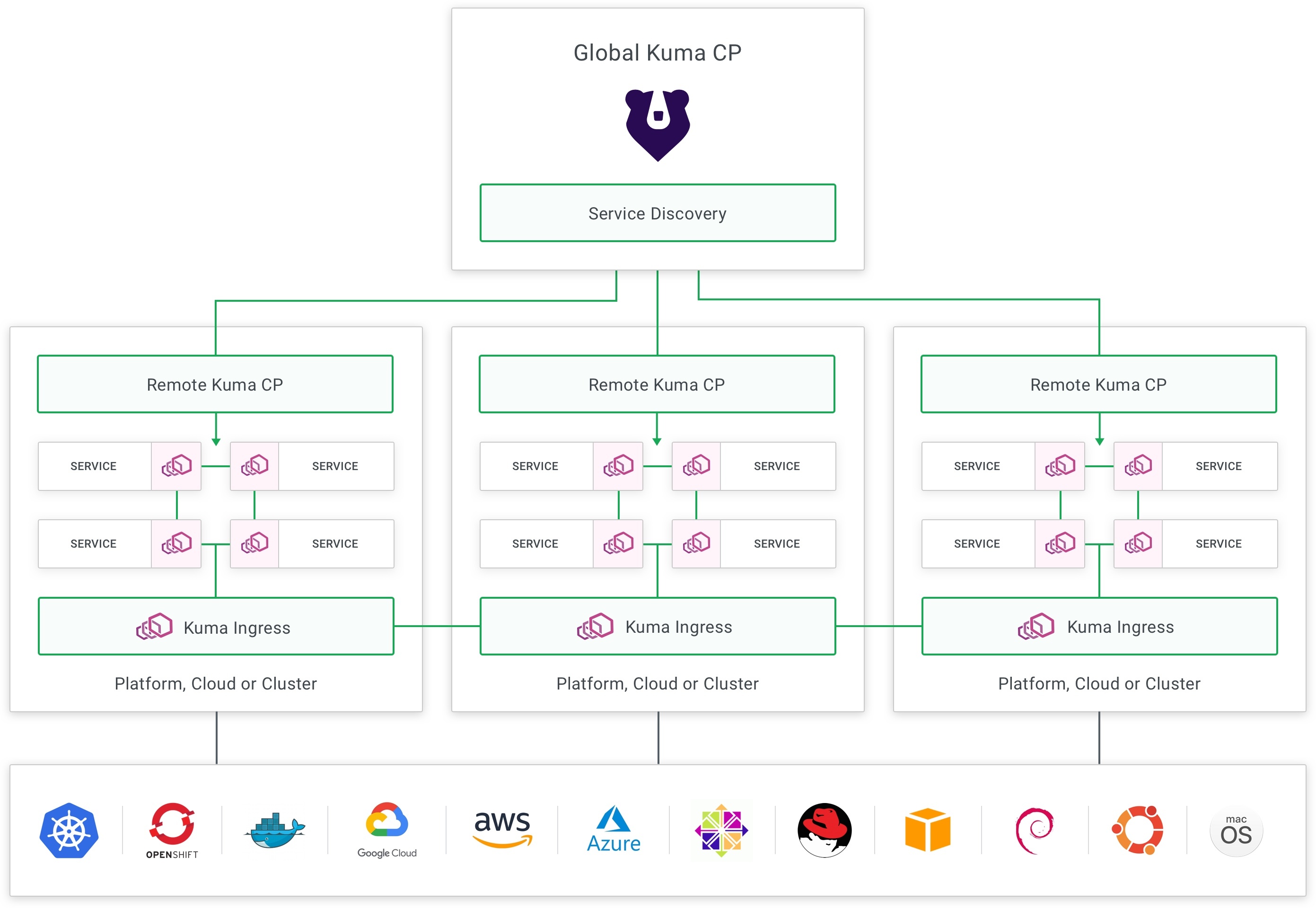 Real-Time Support: The Kong Mesh community provides channels for real-time communication and support that you can explore in our Community page. It also provides dedicated Enterprise Support delivered by Kong.